It feels like everybody is talking about golf. The Masters just came to a close, the grass everywhere is getting green and people are battling for tee times like never before. What started as a care-free, quarantine-friendly activity for many has now taken over just like the virus that got us all here in the first place. The golf explosion is real and this time I’m on board.

I grew up tagging-along behind my dad a few times a year squeezing in super-twilight tee times between club sports and family dinners. I remember the way the late-afternoon sunlight hit the grass, the way the shadows bent as we rolled by in the cart, and I remember the way my dad said “fuck” after we realized his ball went a bit too far and landed in a hazard.

Over the last dozen years, I could count the number of times I’ve played golf on one hand. As a kid I took to sports with a natural ease, was a solid baseball and soccer player, and then would go on to play volleyball at a division one university. For me, golf was different. I developed a wicked, boomeranging hook that my fragile, immature ego couldn’t handle, and then lost interest in the sport altogether.

From January 1st to April 1st of this year I have played golf 48 times, I’ve done many two-a-day pitching and chipping sessions, hit thousands of range balls, and have become the young-adult-learner that everyone loves to hate. My name is Ryan Baine, I am 28 years old, and I am addicted to golf.

Right at the start of the new year I left the first real career job I’ve ever had. I had only been there about five years, but for me it felt like a lifetime. I cared for it, loved it, and if you asked folks close to me, they saw the brand as an extension of myself and the things I was most passionate about. I did more for this brand than most would ever know, and I did it willingly. Why? Who knows, but as I write this love-letter-of-sorts to golf I’m wondering if I am the kind of person who just needs to sink into things as deeply as possible. Soak up everything it’s got, and then burn out just as quickly as I stumbled into it. Or maybe it has to do with passion, stubbornness, and an ability to be one big pain-in-the-ass for those who aren’t looking through the same viewfinder as I am. As I look back, I even remember being told at one point that I had maybe just a little “too much passion.”

I can’t exactly remember the wording of my dogged approach, but man, it stuck with me. I can be both painfully stubborn and exceptionally driven in many aspects of my life. Maybe this is exactly why I’ve become so smitten with the game of golf. Maybe golf requires this cocktail of persistency, ego, and drive. It is a pretty self-minded game after all. Isn’t it?

Long story short: these days I have time. I also have enough money to play my local municipal course a few days a week, and I have the naivety to hope that sooner or later my game will improve. But why put in so much work on a meaningless game? There’s so much more to it than simply sport. Golf comes with community, culture, style, and an endlessly challenging set of mental obstacles. 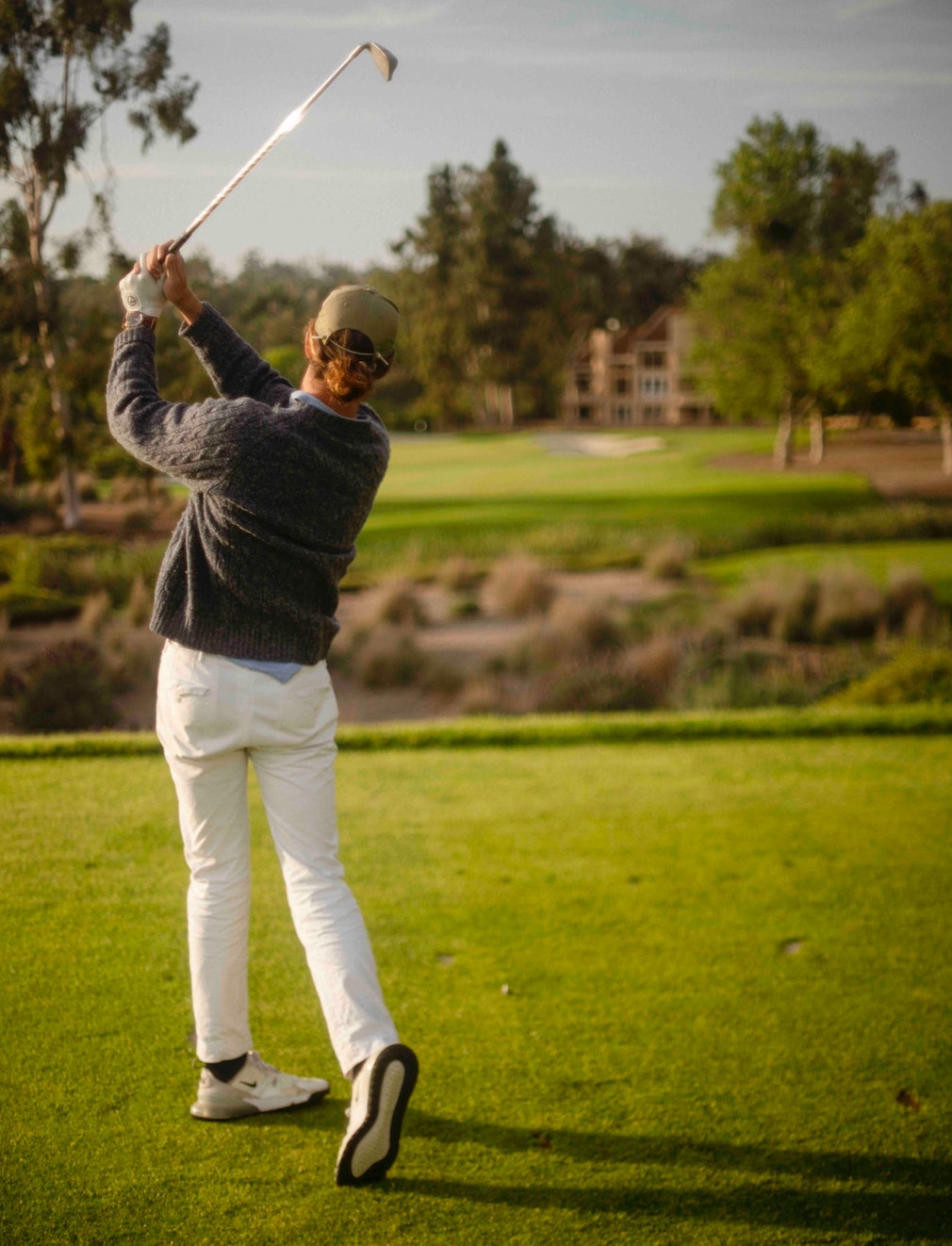 I’d be a liar to say I haven’t thought about the networking aspects of the game. While I’ve always been weary of social climbers, I’m just as guilty as the next guy. I’ve always wanted to get decent enough where I could say, “hey, let’s go tee it up some time,” and not completely embarrass myself. The fear of playing bad in front of people I told myself I was supposed to impress was just too great. This fear is pretty trivial though because if you play enough golf you’ll learn that there’s no escaping those shanks off the number one tee. It’ll happen, and it will happen to everyone. You just gotta put in the time to figure out how the hell to minimize it, and then you just have to get on with the damn thing and have fun with the folks you’re with. I try my best, but fail often.

My dad and a few of my longtime friends are great players. I’ve known this for at least half of my life and have always thought I’d get my shit together and join them at some point, but it wasn’t until recent years where this realization of “networking” out on the course really kicked in. You can play for fun, you can play with friends, and you can play to make friends. For me, golf is a step out of the niche and a leap into the mainstream. Everyone plays the game. The further along in the apparel and “makers of things” world I got, the more I realized how many people golfed. It seemed like every CMO, or Design Director I came to know was a frequent golfer. Of course, we’re talking about California where golf is a perennial game, but damn! What am I missing out on? And why have I been putting it off for so long? “Too busy with work to learn a new thing” was no longer a valid excuse. I had to give it a shot. Two miles down the road, a left into my parents garage to grab a perfectly-fine set of hand-me-down clubs, and then straight to the range. I was in.

Once I started actually trying to learn the game, I began realizing that I had more connections with it than I originally thought. As I’ve become more involved in the apparel world, I’ve naturally become increasingly interested in style and the trial and error process one goes through to find their own look. The evolution of my personal style intersects with my interests in golf. There’s a particular brand of coastal-ivy-cool that I’ve been reaching for. The kind of nostalgia you get from those old country club photos: The knitted sweaters, the pleated trousers, and the bench-made shoes. And the sort of laid-back, coastal charm you see in those old photos of Lawrence Halprin and The Sea Ranch crew: Salt water soaked wool, 501 jeans, and a playful take on layers and patterns. Golf seems to fit right in there for me (minus the denim). A slightly buttoned-up look, but loose and athletic. It’s classy with nods to the past, but there are ways to make it fun and fresh again. When I think about golf, I think about the number of different shots a person can play from any given lie. You can flop it over the tree, or you can work the ball around it. When I’m thinking about golf, I also think about the number of ways you can express yourself through the clothes you wear. There aren’t uniforms that dictate what we should wear, and there shouldn’t be. Dress appropriately and follow the rules, but have some fun while you’re doing it. Be yourself.

There’s the time spent with friends, there’s the ivy-adjacent style, there’s the clear, uphill-battle of improving one’s game, and of course, there’s the networking. But what I’ve found to be the biggest lure to golf is the space and time. This multi-hour commitment to sit with my thoughts, to pace back-and-forth, and to find conclusions. There’s something great that comes with time away from the inbox. With mobile phones, WIFI hotspots, and this new work-from-home culture it’s harder than ever to take a minute (let alone a day) to think critically. There’s this expectation that everyone is always on, and always reachable. Over the last handful of years, I’ve been the guy in constant green-bubble mode. If I’m out playing a round with my buddies, my phone is tucked away into the bag and my thoughts and ideas are there in the moment. It’s definitely true that if I’m playing with a gang of guys that time is not spent thinking up new and exciting big ideas. For that matter, I’m not sure that I’ve ever had a “big idea.” I do try my best to be engaged and have a good time when I am with friends, but when I’m out on the course alone (playing with random people) real personal ideas can begin to marinate. This sort of mental distraction is nearly parallel with my experience as a surfer. There’s something great that happens when you’re both totally absent and as present-in-the-moment as ever. In golf, there’s the hyper-attentive moments right before and during a shot, and then the down time spent walking towards the next ball. In surfing, there’s the adrenaline-fueled seconds as I begin to see a set peak up over the horizon, as I scramble to get into position, and as I turn around and go on a wave. And then there’s the expressionless moments as I bob up and down on the board, stare out into the sky, and wait for the next opportunity. It’s in these down moments in surfing and in golf that our minds can begin to wander. For me, it’s in these brief instances that I’m able to lose sight of near-term problems and stress, I’m able to begin to think about ways of picking myself up, and I’m able to start figuring out what it is I want to do in this life.

I’m new to golf and have heaps to learn about the game. The connections it brings you, the strategy and skill it requires, and the number of ways in which you can stand out as an individual through the game have me hooked. I look forward to all of the good shots I’ll hit, and the lessons I hope to learn from the loads of bad ones I’m sure to miss. I’m excited to travel to play new courses, to geek-out on the gear, and to have another excuse to be outside and away from stale air. I’m so ready for all of the characters out there and their endless stream of quirks. With a bit of luck, my next real career role will come soon. I know that the amount of golf I’m currently playing is not sustainable, but hey, golf can be played for decades. There’s no rush. I have a hunch that once I’m back to working normal weekday hours the time I spend playing golf will be less of a mental distraction and more pure fun. I look forward to this.