Notes from Japan on His Historic Win.

Editor's Note: This is the first of our new column Our Man in Japan where our Tokyo-based PGA professional friend Joe Gaughwin enlightens us on the many intriguing aspects of golf in Japan.

The pandemic has had a truly devastating effect on Japan, with many industries being truly decimated. To make matters worse the disappointment of not hosting the 2020 Olympics and the uncertainty of 2021 is really quite heartbreaking as so many livelihoods depend on them going ahead. To say that Matsuyama's win has had a great effect on Japan as a whole might be the understatement of this century. The collective excitement of the Japanese people yesterday and even today is absolutely tangible. The great sense of hope his win has created during a terrible time has given the people of Japan something to cheer about. The tears that flowed from my friends and colleagues eyes after his win was quite extraordinary and something I will remember forever.

In 2010 Hideki Matsuyama won the Asian amateur which stamped his ticket to the 2011 US Masters. The catastrophic Tohoku earthquake and tsunami took place on the 11th of March 2011, less than a month before Hideki was supposed to play in the Masters. Hideki felt obligated to stay in Japan and forego his place in the Masters but his family, friends and supporters urged him to play during what must have been an emotional time. During his interview yesterday in the Butler Cabin, when Jim Nantz asked him about what it would mean to Japan to have a Masters Champion, Hideki hesitated. You could tell he was holding back tears during his response, and for good reason. This win was more than just a win for himself but a thank you to his country for the support they provided him during the Tohoku disaster. Hideki ended up as the low amateur that year which is in no doubt one of the reasons he is now the US Masters champion.

What was never apparent during the interviews after his win was the emotion that Hideki was hiding from the press. There was footage of Hideki calling his University Coach after his win. Apparently no words were exchanged as both were so overcome with emotion that neither could speak.

The golfing world doesn't know all that much about Hideki. Even his friends on the Presidents Cup team and PGA Tour didn't know that he was married. To be honest not all that much is known of him in Japan either. Actually I would say that the press know a lot about Hideki but something that is an unwritten rule in Japan is that they respect the private lives of their superstars. That is unless there has been some sort of scandal and then they totally expose them. All I know of Hideki is what other golf professionals who have played with him have told me. They said he is serious, quiet, shy, fiercely private, not particularly friendly, determined and driven.

Some interesting comments on social media from people of note in Japan.

"It was really amazing. Under the chronic COVID-19 pandemic, I believe his victory gave people all over Japan excitement and courage."

Since he graduated Tohoku Fukushi University the Prime Minister also mentioned that "His win means a lot to the restoration of Tohoku region. Not only as a Japanese male to win the Masters for the first time but also as an Asian to win it for the first time. This is a remarkable achievement. He is still young. I am looking forward to seeing what his future holds."

"Congratulations on the victory! This was the moment that not only myself but  golf fans all over Japan have dreamed about (hoped for, waited for). In 2011 the Tohoku earthquake happened right before he left for the Masters, when Japanese people were in deep sorrow. Hideki was the low amateur and brought us courage, especially the people in Tohoku. This year the world's pandemic has created a lot of restrictions in Japan. Japanese people are struggling so much during this difficult time but his victory has given a lot of people hope. His victory will allow young children to dream big."

"Congratulations. I'm really happy for you. The last 9 was tough... I didn't imagine I would have such an emotional day like today. When you are back in Japan please let me put just my arm in the green jacket!"

"This is an incredible achievement in Japan professional golf industry This is the result of Hideki's determination, courage and his effort. I was not expecting him to do so well considering his recent performance but this week's swings were really amazing. I'm looking forward to seeing more young players following in Matsuyama's footsteps, to be able to play competitively on the world stage. Congratulations."

A few other things I picked up:

Matsuyama's win was announced as a breaking news on Japanese TV and both Tommy Nakajima and Yusaku Miyazato (Ai Miyazatos brother and tour professional) who were doing the commentary on TV were very emotional and in tears. Many comments from Japanese professional golfers who were celebrating his win and commenting on Twitter.

Hideki Matsyuma had not won on the US tour since 2017 and decided he needed to make some drastic changes in preparation to get back into the winners circle. The loss in the 2017 PGA championships to Justin Thomas, an event he led during the final day, was a clear indication that something was wrong. The disappointment and the tears that followed the loss showed a weakness that required attention. Matsuyama said his biggest weakness was not being able to forgive himself for mistakes which impacted negatively on his scores. Hideki had sought advice from prominent US tour coaches but none of their information had ever resonated. He realized after much deliberation that it might be worthwhile having a full time coach to understand his swing and but importantly assist with the mental aspect of his game. Teaching professional Hidenori Mezawa has recently been added to team Matsuyama. Mezawa is a graduate of the Japan University Golf Club, a level 3 TPI golf Instructor and coach to rising star Yui Kawamoto who plays on the ladies tour in Japan. Matsuyama believes talking openly about his thoughts to Mezawa has helped him tremendously. His new mindset now allows him to forget bad shots quickly and move on, creating a more positive mindset while playing. He believes this is one of the biggest reasons for his win at the US Masters.

Four years after that fateful day at the PGA, Matsuyama took the lead after Day 3 of the 2021 Masters. He was proud that he was able to do it without being overly nervous or becoming hard on himself for poor shots. The night before the last round he thought if he could continue this mindset he would be a good chance to win. A thought that obviously came to fruition.

Another area that Hideki has worked tirelessly on his equipment, especially the driver. In recent years has used a bevy of drivers from rival manufacturers without great success. He can apparently be terribly demanding in regards to his equipment and his club sponsor, Srixon, was continually not able to produce a driver that he was comfortable with. The appearance at address is something Srixon couldn't get right and Hideki even sent back a driver because he didn't like the feeling it game him at address when the sole touched the grass. The performance of the driver was of course the most important element and he challenged the staff to create a driver that flew further through the air. Srixon decided to headhunt a Taylor Made staff member to build a driver that met Matsuyamas needs. Suffice to say that Hideki used the Srixon ZX5 driver to win this years US Masters. A massive coup for Srixon to have performed on such a big stage and I am sure a huge relief for his support staff.

The fallout in Japan and what Hidekis win it will do for the golf industry will be interesting to see. After Hinako Shibuno won the 2019 British Women's Open and returned to Japan she participated in 13 more tournaments on the local ladies tour that year. In those 13 tournaments the crowds increased by nearly 80,000 people compared to the year before. The Japan Women's Open was a great example with an increase 20,663 people compared to the previous year. There is no doubt the increased numbers at these tournaments was due to people wanting to get a glimpse of the new star.

Although Matsuyama is based in the US, and his starts are limited on the Japan tour, there is great hope that he can increase the gallery numbers significantly when he does play. He will play in the Japan Open, Taiheiyo Masters as well as the Dunlop Phoenix tournament in Miyazaki. This no doubt have a great impact on the younger generation to encourage them to take up the game.  This could be the boost that the golf industry needs in Japan and I look forward to watching what the knock on effect will be after his epic win. 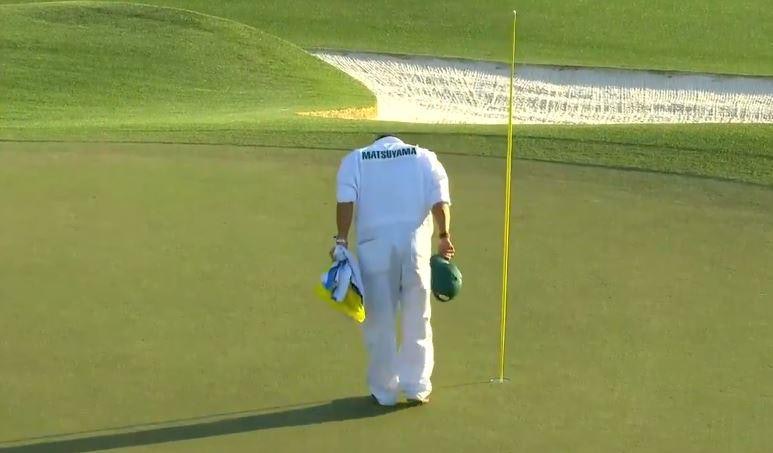 One more thing. The caddie who took off his hat and bowed after replacing the flag has created waves which is fantastic. The rest of the world needs to know that every caddie at every course in Japan does that after each round. Some of the caddies do it after each hole is completed as a sort of paying respect to the group behind, thanking them for waiting. It was a nice touch and I hope it creates a situation where more people consider coming to play golf in Japan.

Joe Gaughwin is a Tokyo-based Aussie PGA professional who works in the foreign relations department for the Taiheiyo Club.