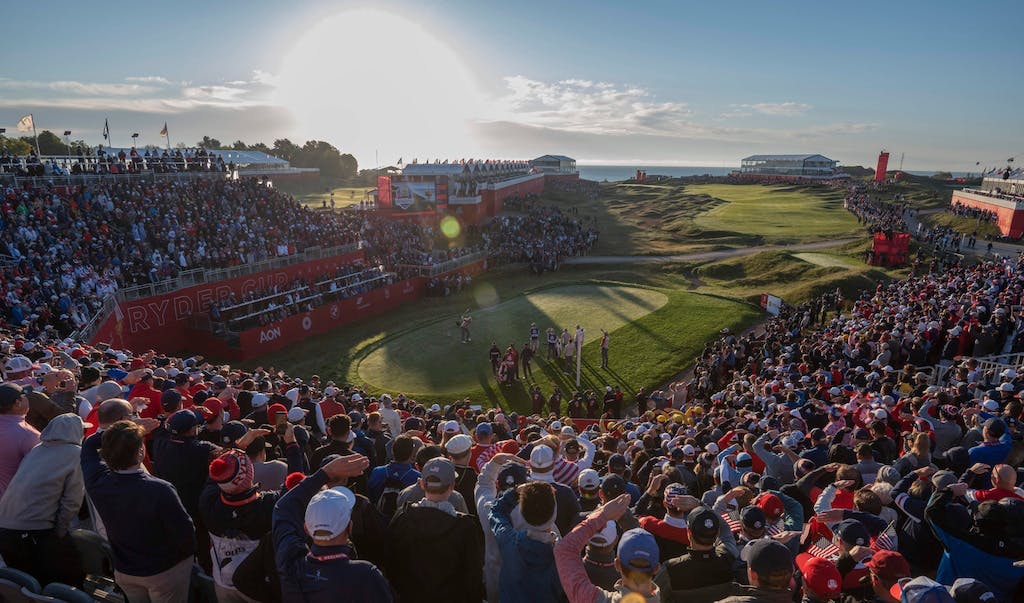 Nearly everyone seems to be captivated by the Ryder Cup. The simplicity of the match-up between America and Europe lends itself perfectly to widespread intrigue and admiration. After a years long delay, the Ryder Cup was played for the 43rd time last week at Whistling Straits in Wisconsin. I was among the many eager people to witness this iconic matchup in person.

Unlike nearly every other professional event, Ryder Cup has two unique attributes: A team format and no purse for the winning team. All that is at stake is honor and national pride. The winners all also receive a Rolex Oyster Perpetual 41 with either a blue dial (for Europe) or Red for team USA.

I was lucky enough to be invited to attend last week at Whistling Straits as a guest of Rolex. I've been the the Walker Cup at Los Angeles Country Club, but this was my first Ryder Cup experience. It didn't disappoint. It felt like a new day in golf and the good energy could be felt all throughout the shores of Lake Michigan.

Everyone knows that golf is booming, and it's not just with the hardcore fans. People went to their garages en mass in 2020 to pull out their old clubs and dust off their game. That meant a boom in rounds and expanded interest in both golf's stars and events like the Ryder Cup. Part of that is the fact that many of us haven't been to a big sporting event like this in too long. The other buoy was likely the buzz around a young American team which went on to dismantle team Europe last week.

Despite my support of Team USA, the Europeans are a likable bunch. A few weeks ago I was one of a few journalists invited to participate in a Zoom call with European Captain Pádraig Harrington and Vice Captain Martin Kaymer to talk about the upcoming Ryder Cup. Each captain from both the European and American teams are Rolex testimonees. So is Jordan Spieth, Brooks Koepka, Daniel Berger, Bryson DeChambeau, Justin Thomas, Phil Mickelson and of course many others including the original 3 testimonees from 1967 Arnold Palmer, Jack Nicklaus and Gary Player. Safe to say, Rolex's golf roster is distinguished and it is obvious that Golf is important to Rolex.

The 2020 Ryder Cup put that golf roster front and center. It was the first time that Rolex had partnered for an American Ryder Cup and this is the beginning of a renewed partnership for Rolex and the PGA of America. Rolex supports many facets of golf and its involvement in the game celebrates excellence and leadership. At the Ryder Cup, Rolex is also the official Timekeeper which means you end up seeming Rolex clocks throughout the course. It makes me think that every time I see one of those green Rolex clocks —be it at Oakmont, Torrey Pines or there at Whistling Straits— it's going to be a good day.

Pádraig Harrinton added. "You come out on tour and you meet different players and the younger players will hear a story like Martin's of winning a watch the younger players are listening, and when they do something special they know they've got to mark the achievement.  Even today, Shane Lowry was wearing a green Rolex today which he bought after winning The Open. That's a reminder for him and it's green obviously for Ireland, but [the watch] marks a story."

I can't imagine all of the stories the watches on each Ryder Cup team could tell.

This was my first time attending the Ryder Cup, but not my first time at Whistling Straits. I was in Wisconsin earlier this summer and made a last minute diversion over to Sheboygan. I had a free day after we shot with David Coggins and I discovered that there was one spot available for the Straits course and I jumped on it, even though it meant I would have to wake up early and drive 4 hours to get there. Whistling Straits is a stunning place that was conjured out of thin air by Herb Kohler and Pete Dye. It's a unique out-and-back figure eight layout which uses as much of Lake Michigan shoreline as it can. Each hole is unique and it can be almost brutally tough if you are unlucky or just don't execute well. I seem to always suffer both of these conditions, but I love a good walk in a beautiful place.

One of the best things about golf is the fact that you and the pros can both play the same courses. Imagine making a reservation to play at Yankee Stadium. Being able to walk the course, putt the greens and, ahem, play out of the rough allows for an unbelievable enhancement to a professional golf event. When you see Bryson drive the green at number 1 and then square-that with where your drive landed from forward tees you get another degree of perspective that any broadcast graphic could ever come close to. My round at Whistling made the Ryder Cup that much more enjoyable. That's one of my favorite aspects of golf, that we are all playing the same game. There's a certain kinship that we all share as golfers. We've all been there for the highs and the lows and can relate to the times of exhilaration and frustration. Hopefully more of the former than the later.

Another way the Ryder Cup is unique is the sheer amount of people that are with the groups on the golf course. The field is obviously smaller and when foursomes or four-ball play is going on there are only certain parts of the golf course in play so the crowds are impressive. The energy was different than anything but the last few holes of other tournaments that I have been to. The feeling was for the most part positive and there seemed to be a baseline "we're all so glad we are out in the world again" energy floating around. It was a spectacle in a way that's not like other sporting events. The Ryder Cup is special.

Through Rolex's partnership with the PGA I had the opportunity to walk Whistling Straits with golf course architect Gil Hanse, a man who's work I admire so much I have written about him previously for GQ. Gil hasn't touched Whistling, but he does come from a branch of the Pete Dye tree and spoke about the principals of the Pete's design work at Straits and other golf course design details. It was a fascinating walk. In my head that is what it would be like to take a Masterclass course in person. I'm not on a Fried Egg level fan of architecture, but I loved talking to Gil about course design and strategy. We spoke about the Yale Golf Course, CB Macdonald, shaping bunkers, the history of some of the famous course and architects and of course New Haven pizza. There's talk of Hanse's new design at PGA Frisco hosting a Ryder Cup in the 2040s, which would be interesting. Of course, that's a long way off. The time with Gil was an incredible diversion from the action between the U.S. and Europe.

After the walk with Gil we followed some golf and eventually ended up near the 16th green where we watched the groups cycle through in their matches. On Sunday we thought we could see the U.S. clinch the win, but it happened one hole further down the course on the 17th when Colin Morikawa ended his match all square with Viktor Hovland. Drinks all around and there was a buzz in the air as the U.S. team started to celebrate.

The trip to Wisconsin was exactly what I needed. Part of me was hoping for a true midwest fall weather weekend, but it was sunny, cool and clear for my few days out there. I'm not complaining. In Milwaukee we drank our fair share of Miller High Life, Spotted Cows and Brandy Old Fashions. We had great coffee at Canary Coffee, witnessed Packers fans celebrate a last second victory and even played 18 holes at the home of the former Greater Milwaukee Open.

The Ryder Cup is one of golf's most iconic events and to be able to be there to see a huge American victory in person has really set the bar high. I think everyone would agree, it was worth the wait.