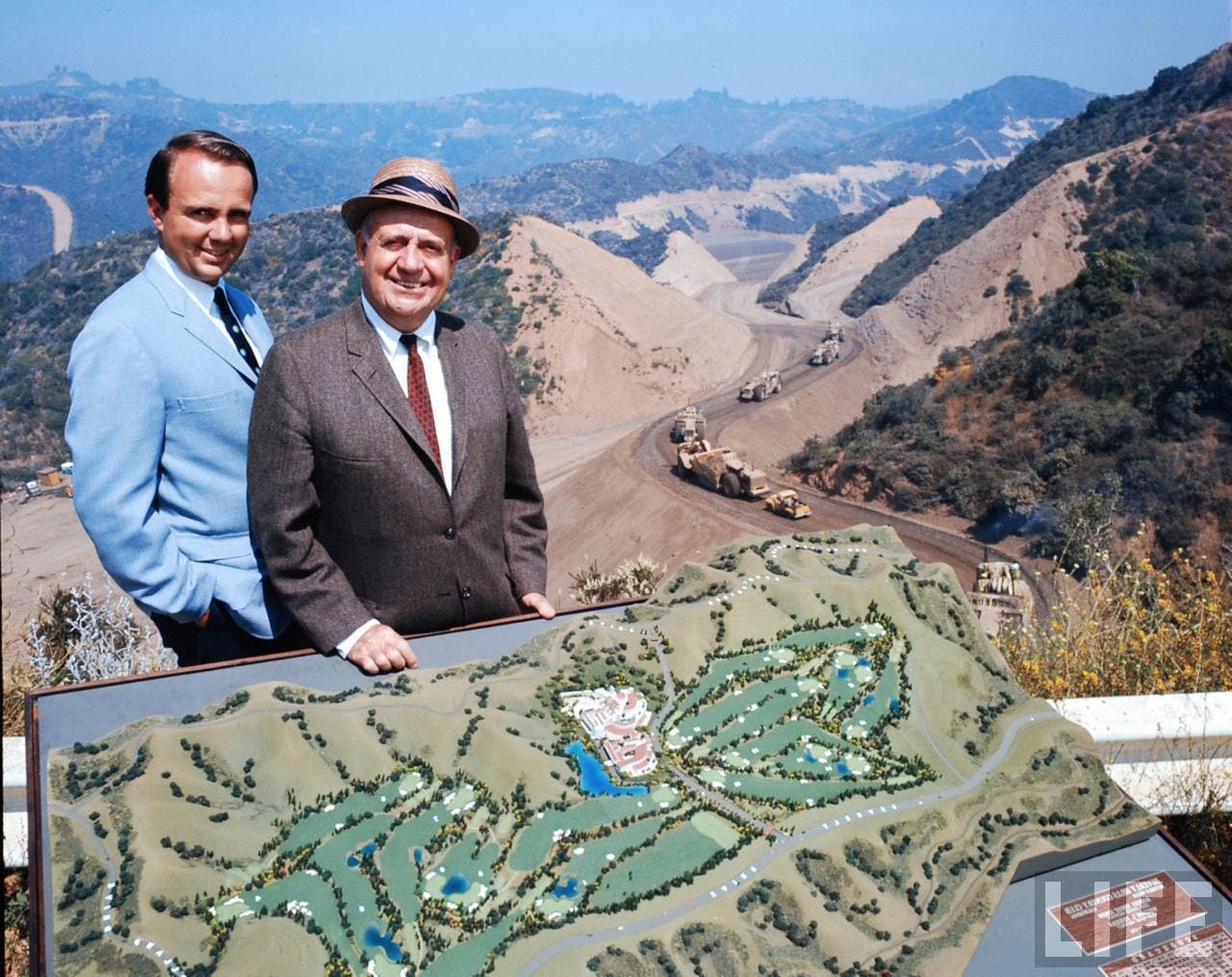 The Most Expensive Golf Course in the World

The image above of Robert Trent Jones Sr (and his son Robert Trent Jones Jr) from the Life archive got my attention one late night a few months ago. I generally recognized the landscape, but just couldn't quite figure out where this golf course was in the Santa Monica Mountains. I searched around on Google Maps for a while and couldn't settle it. Then one day I happened to be sitting with Geoff Shackelford and showed him the photo and he instantly knew it was the failed Beverly Hills Country Club.

I've lived in Southern California for 6 years now and I'm certainly not an expert on L.A. real estate or golf architecture. I did however live in a canyon in this same mountain range, so this photo was too intriguing and seemed worthy of a deeper look (it at least warranted a Google Search). What I found is pretty fascinating in terms of Southern California golf course design. The shady real estate dealings that surrounded this project could have easily become the plot of a Scorsese movie.

The story of the Beverly Hills Country Club began in 1968. The proposed plan for the club was going to cost $23 million ($176M in 2021 dollars) which made it the most expensive golf course in the world at the time. (Side note, there are several golf courses currently that cost in the $260M+ range to build — which is insane.) BHCC was a response by some golf obsessed Hollywood types like Dean Martin to build a club of their own – it was really just more of a straight-up real estate play by some seemingly shrewd developers. 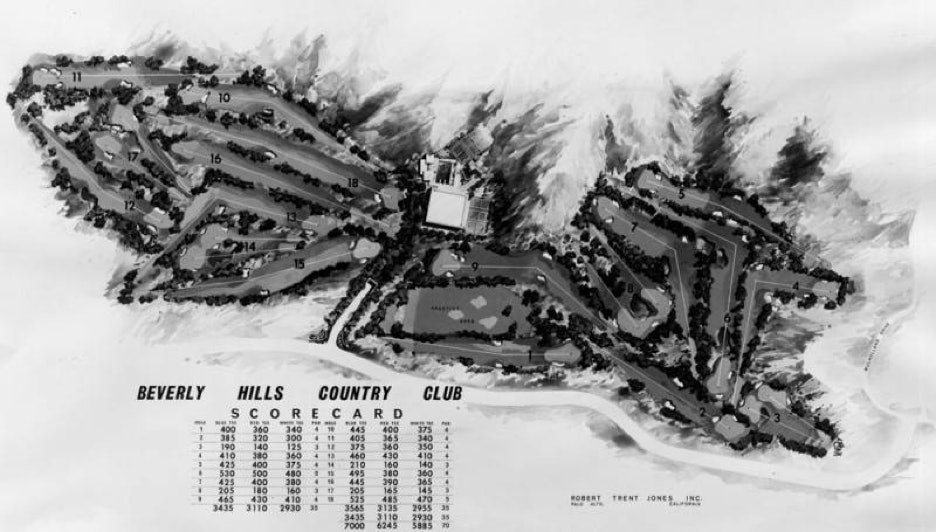 "Architectural rendering of the Beverly Hills Country Club designed by internationally famed golf course architect Robert Trent Jones. This 22-hole course was designed by Jones for the new $15 million Beverly Hills Country Club. The championship 7000-yard course layout will have four duplicate par three holes which Jones said he is adding as a means of eliminating "the annoying slowdown on par three holes." According to Jones, the course "will have golfing character that will make it a pleasure for the average golfer and a test for the better player." Photo dated: April 25, 1967." (From the Los Angeles Library digital archive.)

The land which the developers hoped would become Beverly Hills Country Club was an area above Beverly Hills called Higgins Canyon. With financing coming from a huge Teamsters loan and Dean Martin acting as the celebrity face of the club (Frank Sinatra was involved as well) and a famous architect in RTJ — the future for BHCC looked promising.

To pull the whole thing off the developers literally had to move mountains. Millions of cubic feet of dirt needed to be excavated from the canyon hills to the valley of the site to create the space for the expansive design. Most of the dirt was moved and the golf course was ready to be seeded when everything came to a stop. It was an ambitious undertaking to say the least, and eventually one that anti-development locals effectively shut-down. Not surprisingly the biggest fear by locals was a proposed four-lane road that was needed to build the development that would later create traffic between the lower canyon neighborhoods in Beverly Hills and the valley. These days fire danger would likely be the chief concern — with traffic a close second. That and there were a lot of organized crime connections in this deal, oh and some illegal financing.

This book Unreal Estate by Michael Gross has a lot of the details on the story of the failed Beverly Hills Country Club. You can read most of it through Google Books which is embedded below. Eventually the Higgins Canyon land became the high-end gated community of Beverly Park. When the project died so did the widespread adoption of dual-green par 3s — expect maybe in Japan. Fast-golf-loving players are still waiting for that to take hold in America.